Our research interests lies in the area of quantum effects at nanoscopic scale. The main research direction we intend to develop will focus on quantum computation and it will involve studies of spin dynamics in two possible cases: magnetic molecules and superconducting flux qubits. Both systems are two level systems characterized by measurable magnetic moments and consequently the physics and the necessary equipment are relatively similar.

Temperatures as low as 10mK are suitable to explore the lowest energy levels of a quantum system. For that, we will anchor the sample to the mixing chamber of our dilution refrigerator. Control over the energy levels will be achieved by combining high frequency electromagnetic fields (f<50GHz) with a d.c. vector magnetic field.

Using an image pulse to create a Floquet microwave shield with a motion commensurate to qubit motion. 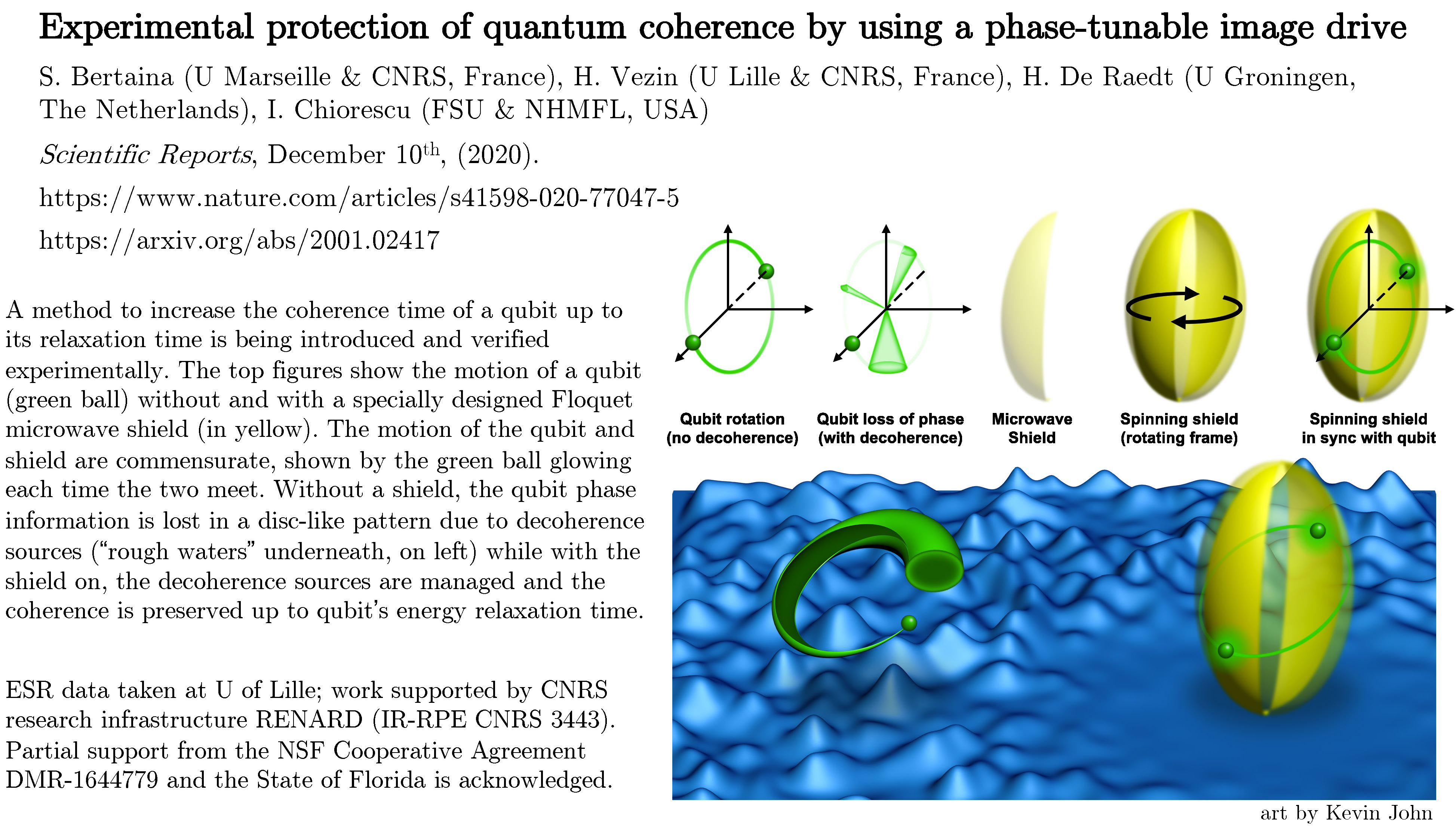 In the recent years the field of molecular magnetism has known a remarkable growth. Right from the beginning these systems were recognized as potential nanosized structures for information storage. Aside from the technological potential, these structures are test-beds for quantum mechanics at macroscopic scale. Each molecule is formed of magnetic ions (see Fig. 1) strongly coupled by exchange such that the ground state of the molecule is described as a single spin. Usually these systems show an anisotropy barrier against spin's free rotation. However, the first studies on such systems [1] have shown the existence of the quantum tunneling of the molecular spin. This was possible because, though in crystalline form, the molecules are relatively well isolated from each other (wherefrom the name of Single Molecular Magnets-SMM). Thus the quantum physics of their spin is not strongly affected by the collective nature of the sample. Also, the moderate size of the spin S (from ˝ to 10-20) combined with large values of the anisotropy barrier ensures energy splitting between the 2S+1 levels larger than kT in a typical dilution refrigerator. At present, literally hundreds of magnetic molecules can be synthesized in chemistry labs around the world, in well defined crystals (see e.g. [2]).

The molecular magnets have demonstrated key quantum effects - like quantum tunneling of the magnetization [1] and Berry phase interference [3] - originating from their well mastered structure. Numerous EPR (e.g. [4]) and magnetostatic studies revealed important details of the tunneling process. Nevertheless, very little is known about the dynamics of a spin during tunneling and if it can be brought into a coherent regime (i.e. coherent magnetic resonance in a tunneling window). Such experiments are needed in order to prove the potential implementation of the magnetic molecules as quantum bits. It is worth noting that a natural advantage of the molecular spins comes from the easiness of constructing a large number of identical qubits by chemical methods. Studies done up to now indicate relatively short coherent times in molecular systems [5], of the order of nanoseconds, in comparison with other qubit implementations like the superconducting systems. A way to restrain the effects of the thermal bath is to operate in the phonon bottleneck regime [6]. The goal of our research program is to achieve coherent control of the total spin of a molecular magnet. We propose to use microwave pulses in resonance with the energy levels of the molecule (qubit) to induce Rabi rotations. Also, we will investigate a second method consisting of applying fast, non-adiabatic variations of the external bias of a qubit. Quantum oscillations between the two levels of the qubit should be observable in both cases.

As solid-state qubits, superconducting systems are ahead of the field at the present time. They have mesoscopic sizes and can be elaborated in clean rooms on tiny chips. They show relatively large coherence times, of the order of tenth of microseconds and are generally described by a two-level Hamiltonian. Thus, they can also be seen as man-made spins that can be manipulated by an external bias. Quantum oscillations have been observed in the Cooper pair box (charge) qubit using the charge degree of freedom and conditional gate operations using such two coupled charge qubits have been presented (see e.g. [7] and refs there in). In addition, a qubit based on the phase degree of freedom in a Josephson junction was demonstrated [8] and a hybrid charge-phase qubit was proven in [9]. The PI of the QSD group performed experiments in the area of superconducting quantum computation during a postdoc at TU Delft, Netherlands where he worked on the so-called flux qubit [10] (see Fig. 2) consisting of three Josephson junctions arranged in a superconducting loop. Single-qubit operations are currently achieved in these systems [11].
Click to see the web presentation of this experiment, performed at TU Delft. 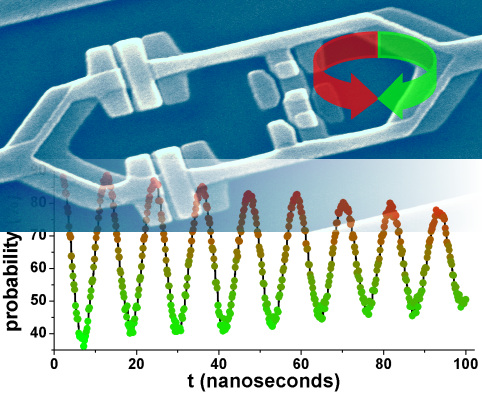 Fig. 2. Large loop interrupted by two Josephson junctions (the SQUID) merged with the smaller loop on the right side comprising three in-line Josephson junctions (the flux qubit). Arrows indicate the direction of the persistent current for each qubit state and the corresponding measured Rabi oscillations are shown below. Click here for an animation showing the switching probability v. the microwave pulse length (the Rabi oscillations).

Significant progress still has to be done to increase the coherence time though the main decoherence mechanisms are relatively well studied. A different approach to realize quantum gates with flux qubits could result from [12] and uses the qubit-squid entanglement. The flux qubit is a two-level system, which is coupled to the SQUID measurement system that detects the quantum states. Simultaneously, the SQUID is an effective inductance which in parallel with an external shunt capacitance acts as a harmonic oscillator. At TU Delft, we achieved generation and control of the entangled state by performing Rabi oscillations between coupled |qubit, oscillator> states. We plan to achieve complex manipulation of entangled states such as demonstrated in ion/atom-trap experiments or cavity quantum electrodynamics but with with superconducting devices.

Please visit the following related websites: the Quantum transport group at TU Delft and the Superconducting circuits and quantum computation group at MIT.

We have built a top loading probe for our dilution refrigerator, allowing us a rapid transit between different experimental techniques. The frequency range of the loading probe is DC-50 GHz.

Heterodyne and homodyne setups have been developed to read out the transmitted and/or reflected signal of an on-chip cavity connected to the mixing chamber. The setups are covering a frequency range from few GHz to 26 GHz. We can measures either superconducting qubits or molecular spins in such configurations.

We are using weak-link and tunnel junction Nb SQUIDs to detect the magnetic flux generated by small nanoparticles or molecular crystals deposited in well defined positions on the SQUID chip. The vectorial characteristic of the magnetic coil is an excellent tool to align the static field precisely in the plane of the SQUID. Work in progress.

We have developped a heterodyne setup able to perform traditional pulsed EPR/ESR studies on samples placed inside a cylindrical cavity at ~200 mK. The frequency range is in the V-band (50-75 GHz)and we are currently exploring the possibility of extending it into the W-band (75-110 GHz).

[2]  As an example of group activities in this field (many more are active), please visit the groups of: Prof N. Dalal (FSU web), Prof G. Christou (UF web), Prof. D. Gatteschi (U Florence web), Prof. A. Mueller (U Bielefeld web).